Meet Inspiring Speakers and Experts at our 3000+ Global Events with over 1000+ Conferences, 1000+ Symposiums and 1000+ Workshops on Medical, Pharma, Engineering, Science, Technology and Business.

Unique Opportunity! Online visibility to the Speakers and Experts

Global Infertility Market
In 2010, worldwide population accounted around 6.15bn of which 49.7% was women. A similar pattern is relied upon to be existing by 2025. By 2025, the total population is determined to be 8.19bn of which 49.5% will be women. One in every four couples in developing countries had been found to be affected by infertility. Nevertheless, research has shown consistently that secondary infertility, which refers to women who have had at least one pregnancy and live birth previously, is more common than primary fertility, which refers to women without a biological child.
According to a systematic analysis of international health surveys, in 2010, approximately 10.5% of women around the world experienced secondary infertility, and roughly 2% experienced primary infertility. The prevalence of secondary infertility, in particular, varies widely by region and country, ranging from less than 6% to greater than 16% of women. The majority of researchers agree that infectious disease, which can lead to fallopian tube blockage, contributes largely to variation among populations and changes over time. Since infertility risk tends to increase with age, differences and changes in the age at childbearing likely play a role. This determined figure clarifies the development capability of the different types of women’s infertility percentage till 2025. Rise in global infertility rates, delayed pregnancies, increase in gamete donations, and rise in IVF success rate are expected to propel the growth of the global IVF services market. The clinical research institutes segment is projected to portray the fastest CAGR of 10.4% through 2025. The Asia Pacific region is expected to register the fastest CAGR of 12.6% during the forecast period. Increasing number of IVF treatments has encouraged more insurance providers to cover these procedures. The world IVF market accounted for $9,015 million in 2015 and is projected to garner revenues worth $17,714 million by 2022, registering a CAGR of 10.2% over the forecast period. 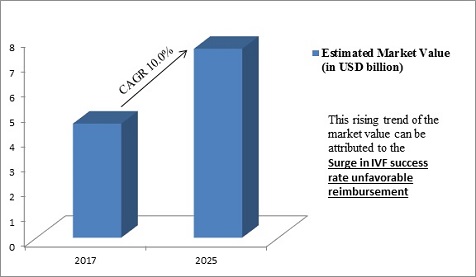 The growth of the market is attributed to the reduced conceiving rates, delayed pregnancy, changing lifestyle conditions and fertility disorders are the major factors that drive the market growth. Other factors such as favourable reimbursement scenario and delayed parenthood opted by couples due to professional and financial constraints will also help in the growth of the market. On the other hand, barriers such as ethical concerns in particular countries with respect to IVF, high cost of the IVF procedures followed by low awareness, especially in under-developed economies such as Nigeria are likely to restrain the market growth.

To Collaborate Scientific Professionals around the World

Abstracts will be provided with Digital Object Identifier by

Universal acclaim based on
8960 Ratings